Ever since I heard that David Bowie was about to come back, I’ve been eager to see what he does and how he does it. He believes that the medium is the message itself, and it is fascinating the way he challenges our perception. The exhibition at the V&A in London last weekend was one of the events held around his comeback.

David Bowie is definitely back with a bang. His two new videos, events and other promotion-related stuff are making people talk about him and his work in different ways, which surely is one of his purposes. In his new video, he outrageously presents himself as Christ to begin with, and looks at the relationship between Catholicism and sex. Outrageous. Well, Madge did that before, and probably better, but it shows that he still is in good shape, not willing to conform to the rules and tapping into a hot issue.

Now, some of the images in his two recent videos are absolutely striking, which I believe is the work the excellent film maker behind the camera, Floria Sigismundi.

Another way in which he challenges our perception is other ways. Firstly, he seems to reject himself and his legacy. The cover of  The Next Day is, in fact, a re-work of the cover for his acclaimed Heroes. In the exhibition at the V&A, the graphic designer who worked with him explained that he intended to move from the past, and that this characteristic is in fact part of the pop culture.

His own stage persona has been changing over the years – Ziggy Stardust, The Thin White Duke, etc. I love the fact that he’s been willing and unafraid to experiment with his own image over the years. 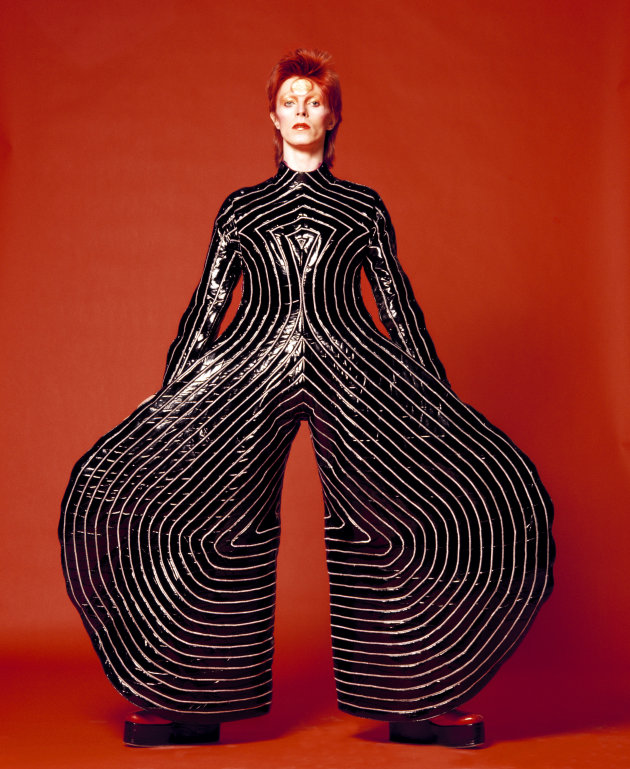 I was curious as to see the character he’d play this time, and even more curious when he turned up playing the role of a middle-aged, middle class man in his first video. On the other hand, the confusing sexual image which two of the characters play in that video, plus the Tilda Swinton’s own image there served as a warning that something else was going to happen.

Did you notice that Tilda Swinton looked really similar to David Bowie in the 1970’s in that video?

At the exhibition, I also learned about how conscientious and experimental he is in his work methods. He experimented with technology in the studio and also to stretch his creativity. I was impressed to learn about the Verbiliser, an Apple programme which chopped up any sentences that were inputted in a random manner. He would take these ideas when writing his songs.

Technology in fact helped boost the exhibition, in the same way as other elements less techy and simpler. For example, mirrors and holes through which we would see various angles of specific areas in the exhibition, eg, areas where some his stage and video clothes were on display.

There was one thing, though. At the exhibition, I couldn’t help but feeling that everything needs to be put in context. Surely the drugs did help a bit with this creativity of his – dangerous message. They did not talk about the racism of the mid to late 1970’s, which Eric Clapton and others are also to be blamed for.

Anyway, just some thoughts there. He is still serving as a role model for artists and musicians. You can ask Noel Fielding. He might even inspire some of the kids in the exhibition too.

Thanks for reading my thoughts!